I didn’t think I’d post anything about our 2019 sojourn, but since we like using the blog as a way to remember our trips, I’ve decided to do one for this year’s travels, and maybe both readers of this blog will enjoy it a bit.

This trip germinated last Christmas when we were here in Elmsford. We had already decided that we would drive our old Toyota RAV4 to Elmsford so Craig and Annie could have a second car. Then one night we were sitting around testing Craig’s Tiki-drink-mixing skills (he passed summa cum laude) when Annie mentioned that she could attend a conference in Paris in late May. Immediately, Laurie and I said, “We’ll take care of the kids so you and Craig can both go and have a vacation in Paris.” It took Craig and Annie about 3 seconds to accept that offer. So here we are.

We took seven and a half days to drive here; we didn’t exactly do any sight-seeing on the way. It was fun, really, with the exception of one day that was less than enjoyable. Rather than doing a day-by-day post I’ll smush the driving days into one post. I promise it won’t be too long; boring, yes, but not too long.

This was a pretty easy drive, though tied for the longest of the whole trip. Why Superior, Montana? Well, it was a good place, distance- and time-wise, to stop. And, oddly enough, it has a motel that gets great reviews: the Big Sky Lodge. The Big Sky is right out of the 60s, except that it has been updated, had comfortable beds and was immaculately clean and well-kept up.

Superior (population 800) is not exactly a center of the culinary art; there are only two restaurants. One is in the kitchen/cafeteria of an unused school and that’s what we chose. “Food like your mother used to make” is their motto and while not exactly true (neither my mother nor Laurie’s made food like this), it was, well, copious might be the operative word. Gotta love that gravy! 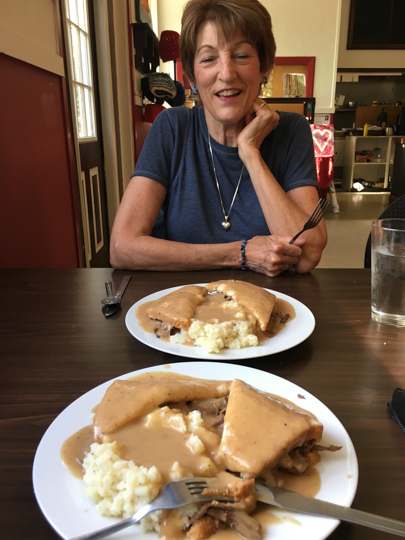 After a walk along the river, we decided to have a nightcap at the lounge of the other restaurant. We ordered up a couple martinis which were just fine and asked for the bill. $6. Not for each, for both of them. Now that is a personal best for low-cost martinis: $3 each. We still don’t know why we didn’t order another couple rounds…

Superior is the county seat and has a beautiful county government building.

Anyway, Superior was a great place for our first night on the road.

Day 2: Superior to Billings, Montana. 403 miles, about 7 hours of driving.

Yes, we drove the whole day and never got out of Montana; this is a BIG state. In Billings we stayed at an independent hotel, the Riversage, which was quite nice and turned out to be our favorite hotel of the trip. It is well-appointed, has a nice comfortable feel to it and because it is near the hospital and away from downtown or the freeway, was quiet as can be.

Day 3: Billings to Rapid City, South Dakota, with a side trip to Mt. Rushmore. 373 miles, about seven hours of driving, including a long Mt. Rushmore side trip.

The highlight of this day was, of course, Mt. Rushmore. It is well worth the side trip and we recommend it to everyone. 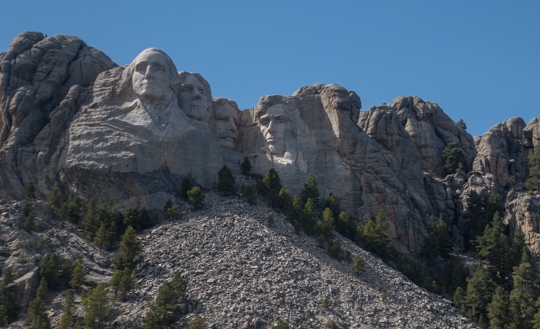 Rapid City impressed us. It has a downtown full of beautiful old stone and brick buildings. We later found a walking tour of downtown and said, “We should come back to Rapid City to explore.” But you know what? I doubt that will happen. It’s a long ways from any place we’ll be in the future, and a long drive to get there. But we did enjoy a stroll after dinner to look at those beautiful buildings.

Not much to see in this part of the country. This was a long day because it was just not very interesting.

Another day of being in one state all day long. It ended in Davenport, Iowa, and the day did have some interesting aspects. First, large parts of Iowa were really pretty, which we did not expect; rolling hills, trees and grass. Second, you should know that Davenport is part of the “Quad Cities,” which is, oddly enough, made up of five cities. Go figure.

The highlight of the day was dinner at the “Machine Shed” in Davenport. Really. “Dedicated to the American Farmer,” the Machine Shed is decorated with every farm poster and implement you can think of and the servers wear farmers’ overalls. Now, since we were definitely in beef country, it was rib-eye steaks for both of us. But first, martinis, which were really good ones. When we ordered our steaks, the server said that we got our choice of two appetizers to share, so we got coleslaw and baked apples; a basket of great bread came with the meal, too. The steaks arrived with a big bowl of corn. And of course we had to top it off with an apple dumpling with ice cream, which turned out to be some farmer’s entire crop of apples and a gallon of ice cream. We were able to waddle back to the hotel without assistance, so we figured it was a successful evening. Honestly, though, the Machine Shed was a hit with us; a great meal and I think the whole thing – drinks, steaks, sides, dessert, tip and all – was $72. 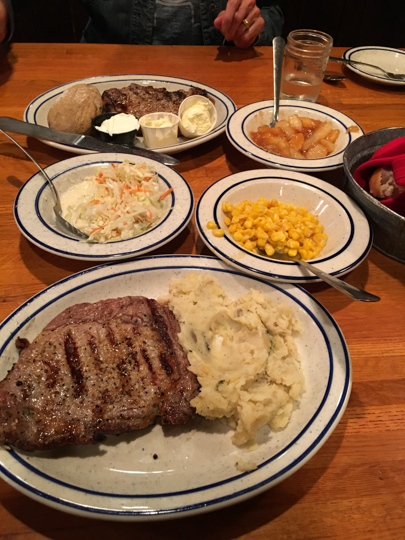 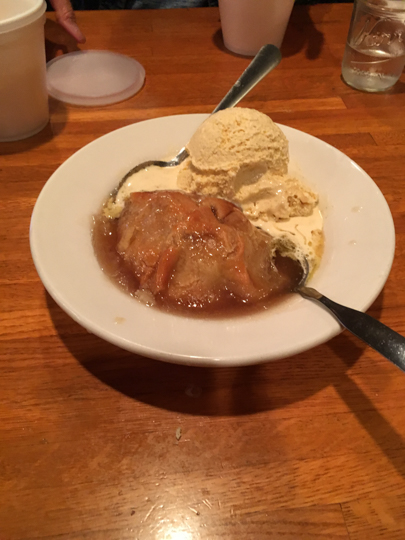 Day 6: Davenport, Iowa to Maumee, Ohio (just outside Toledo). 396 miles, about nine hours of driving with a big delay.

Okay, ya gotta have one bad day on a trip this long and day six was it. Chronologically:

A big event: we drove by Lorain, Ohio, the hometown of our wonderful friend in France, Jamie Rufin. Next time, we’ll even stop there. Maybe.

The biggest surprise for us was how beautiful Pennsylvania is. Forested hills and valleys, rivers and streams; we loved it. In Lewisburg we found the best of the chain hotels we stayed in, but there was nothing else special about our night here. Still, we want to return to this area to explore, and as it’s half a day from our Elmsford Zumsteg base, I suspect we’ll be able to do that someday.

Day 8: Lewisburg, Pennsylvania to Elmsford, New York, our home away from home! A measly 244 miles and 4 hours of driving.

Half a day of driving, and pretty easy navigation. But the New Jersey drivers – holy cow. The high point was driving on a four-lane interstate with most drivers (including those huge trucks) going 80 mph, changing lanes every three or four seconds and thinking nothing of pulling up to two feet behind us. At that point we saw a sign, “Report Aggressive Drivers #77.” Are you kidding me? We would have needed an intercom to do that. We would have just read them the license plate number of every car on the road. I am sure there were people that went home that night and raged about that stupid car with Washington plates that drove at the speed limit and stayed in the right-hand lane the whole time.

But we made it to Elmsford and were glad to be there. Geeze, were we happy to see Craig and Annie and Clara and Henry! Total mileage: 2,987 plus a few for getting to and from restaurants. Honestly, we enjoyed the whole trip except for that one day. This is, indeed, quite a country we live in. We hope we can see more of it, and spend more time in some places we whizzed through.

This entry was posted in New York, Rambles. Bookmark the permalink.