We made one more trip this year – to Elmsford NY for Halloween. Craig and Annie’s neighborhood really does Halloween big: the majority of the houses are decorated, from a few pumpkins to full-yard displays of ghosts, skeletons, ghouls, laser light shows and so forth. The night starts with a neighborhood party and then everyone goes out for goodies. This year the number of kids was down because it was colder and wetter than it has been, but Craig and Annie had somewhere near 200 kids come to their door. Way, way fun!

Now, this is going to be a long post so I want to first put in some pictures of Clara and Henry at Halloween. I apologize that the picture quality is not so great; I was taking videos and the quality of a still from the video is not the best. 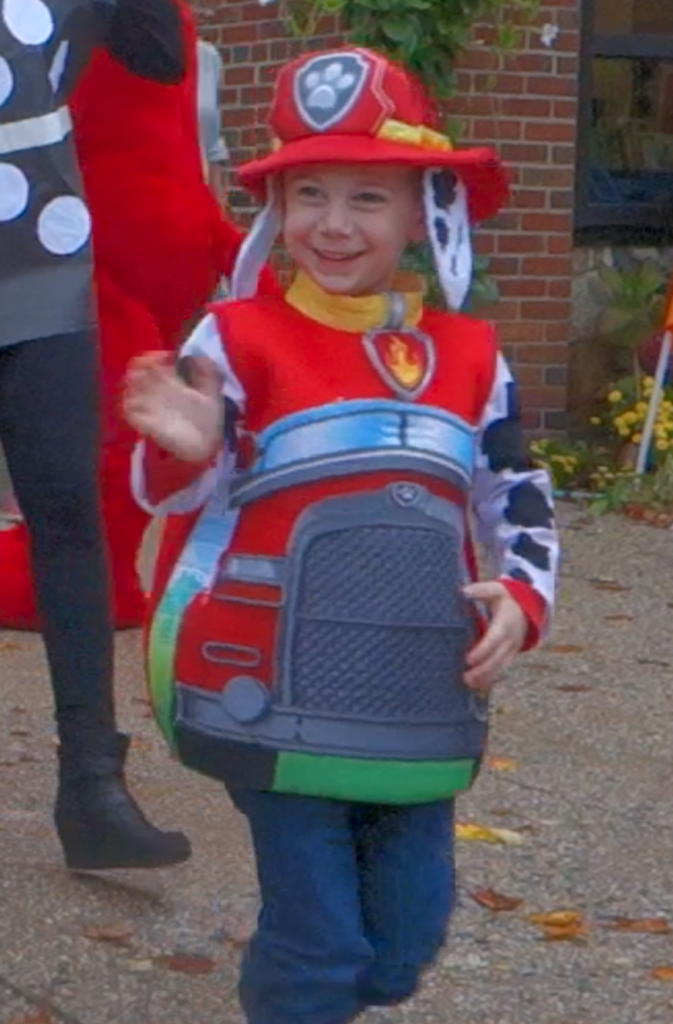 Henry waving to the crowd as he starts the school parade. He’s one of the Paw Patrol characters. 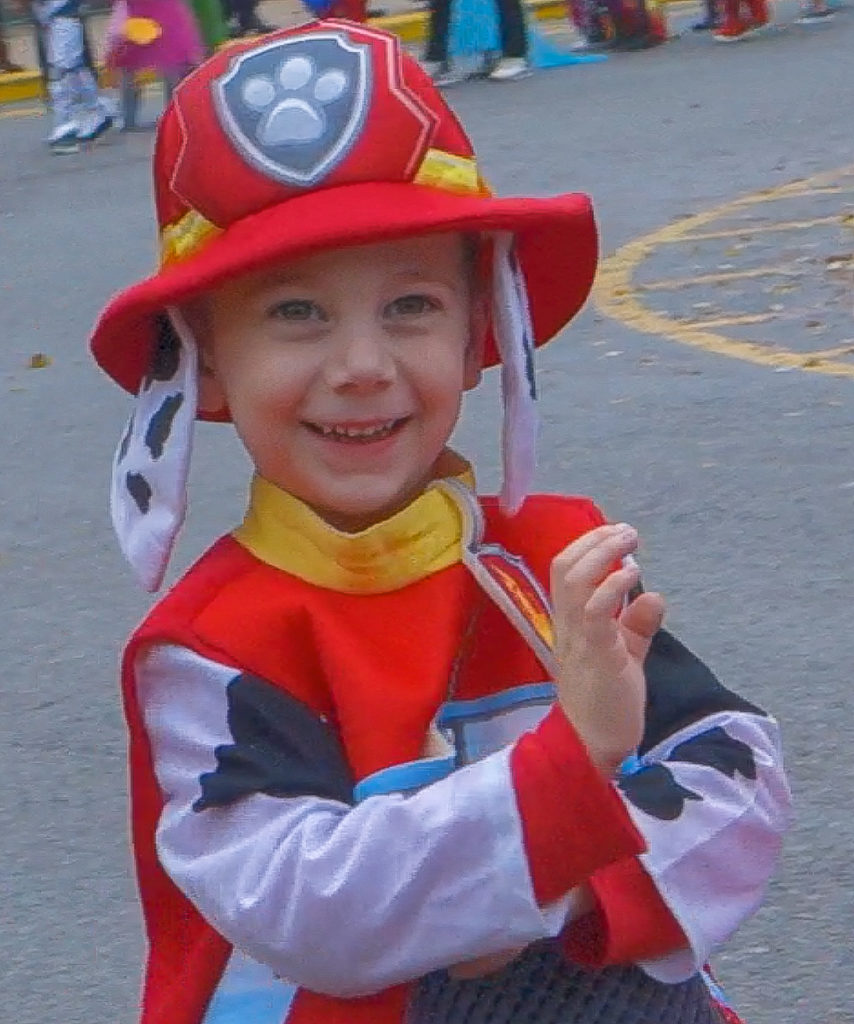 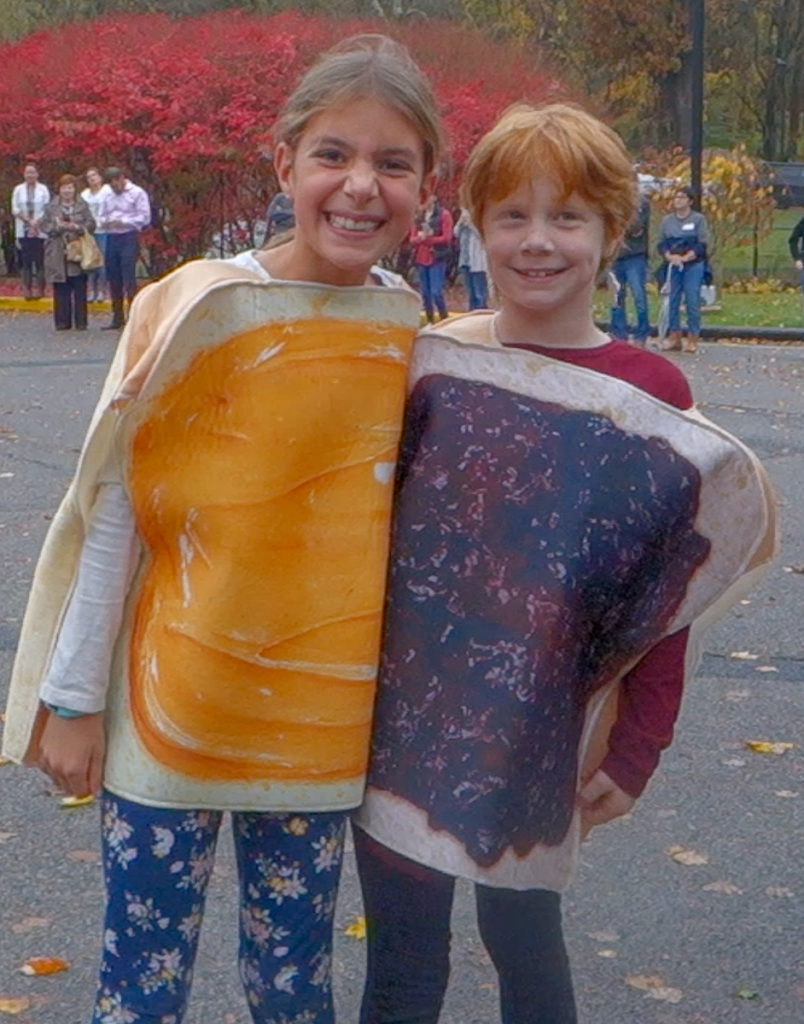 Clara and her best friend Daisy, going as a peanut and butter sandwich – Daisy is peanut butter and Clara jelly. 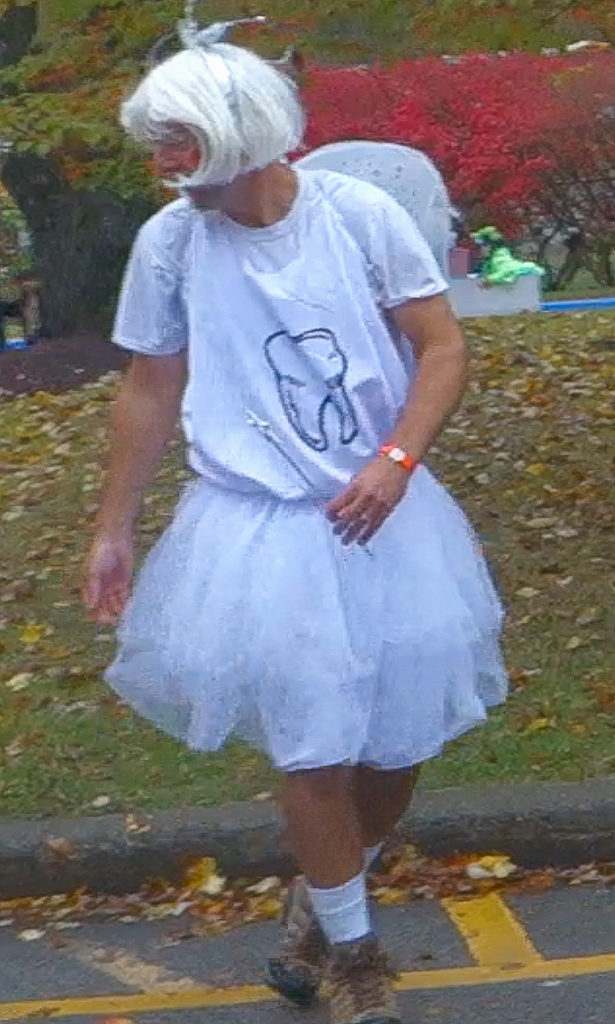 The Tooth Fairy, as played by the principal of Clara and Henry’s school. Gotta admire a guy who will do this! 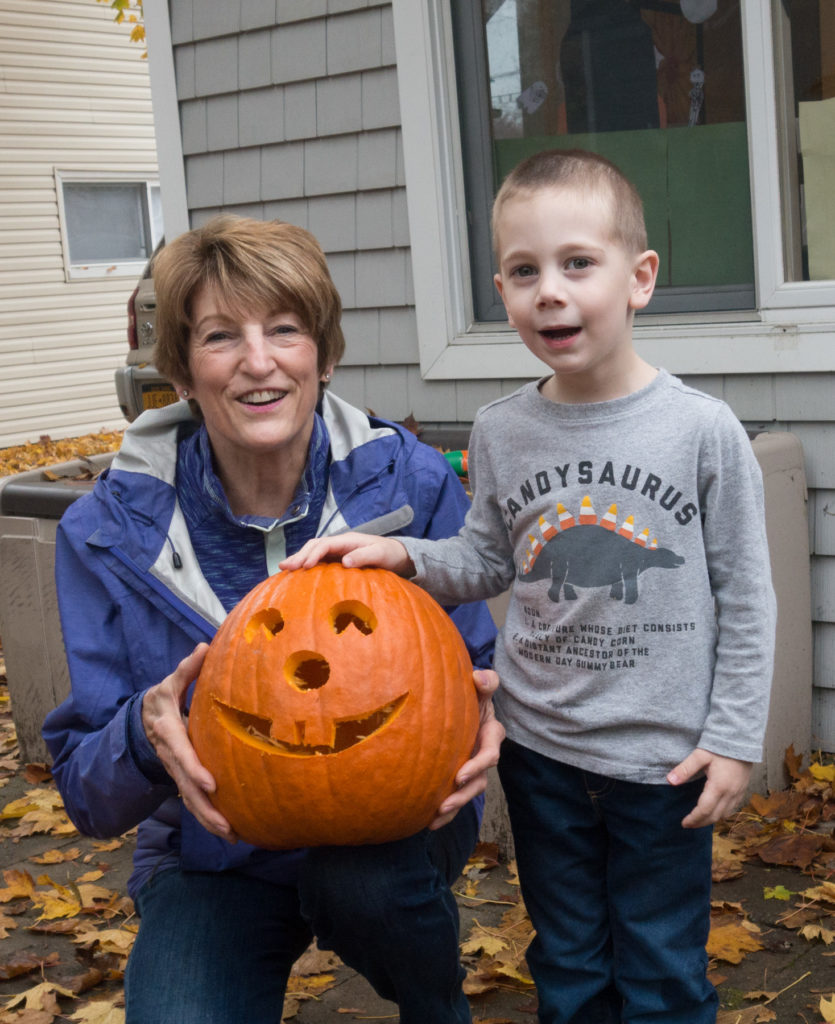 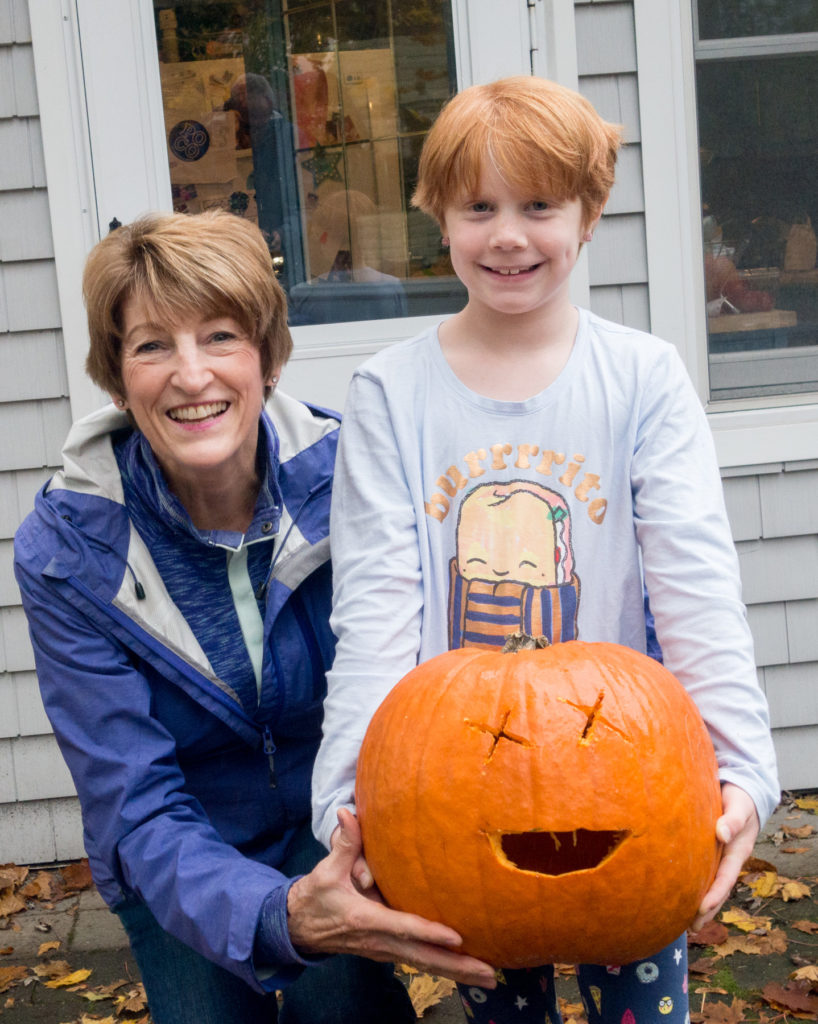 For a couple reasons we saw more interesting places around Elmsford on this trip than on all our previous trips combined: with Henry in all-day Pre-K, Craig had more time to do stuff with us; and with two cars (see: A second car) we were able to get out on our own much more.

We learned about Storm King Art Center when we saw a PBS Newshour segment on the artist Andy Goldsworthy and a wall he was building at a museum in Kansas City. The wall –  a low slate wall hand-built of local materials – fascinated us and in reading more about him, we learned that he’s built a number of these walls as art installations and that one is at the Storm King Art Center, about 45 minutes from Craig and Annie.

Now it turned out that on Saturday, Annie needed some quiet time to work on a proposal so Craig loaded us and Clara and Henry into the car and off we went. Storm King is a 500-acre park dedicated to outdoor modern sculpture. Now I can tell you that Laurie and I have not been great aficionados of modern art, but I can also tell you that after seeing Storm King, we’re getting there, especially as it relates to sculpture. I think the setting for large abstract art makes a huge difference, and Storm King has so much space people can see the pieces from afar, from close up, from all around them.

Andy Goldsworthy’s wall winding down a hillside among trees in their beautiful autumn colors. 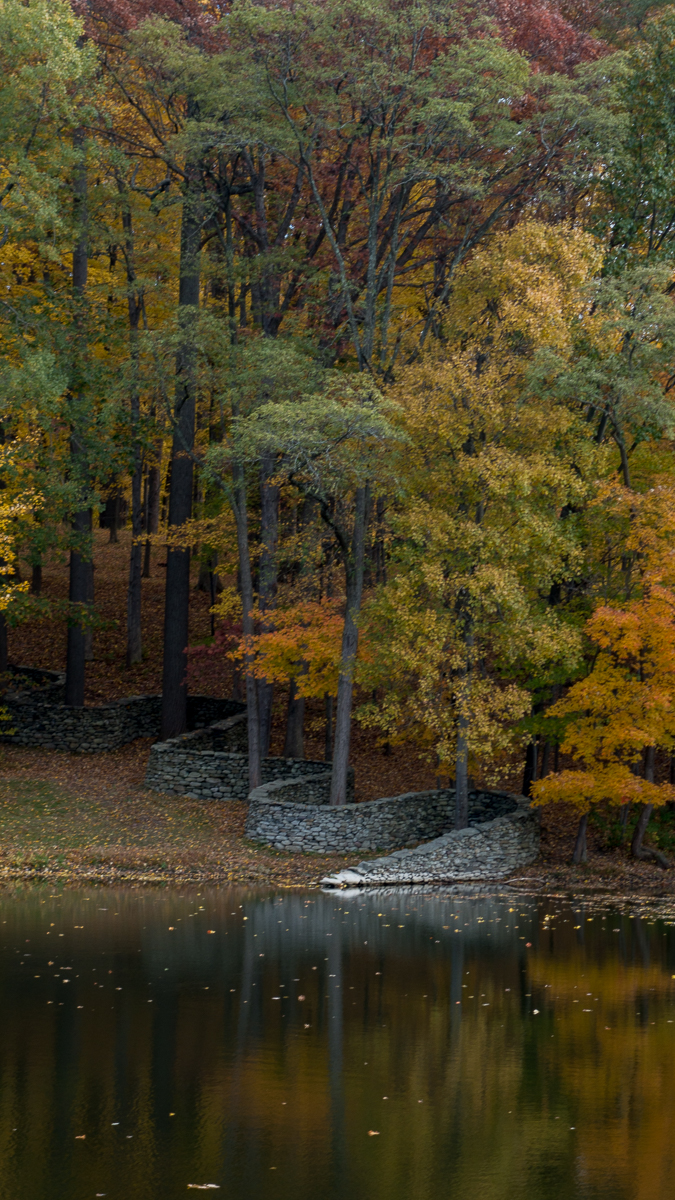 When the wall reaches a pond it goes into it and comes out the other side. I heard someone say that it actually goes underwater across the bottom of the pond but I didn’t dive in to verify that. 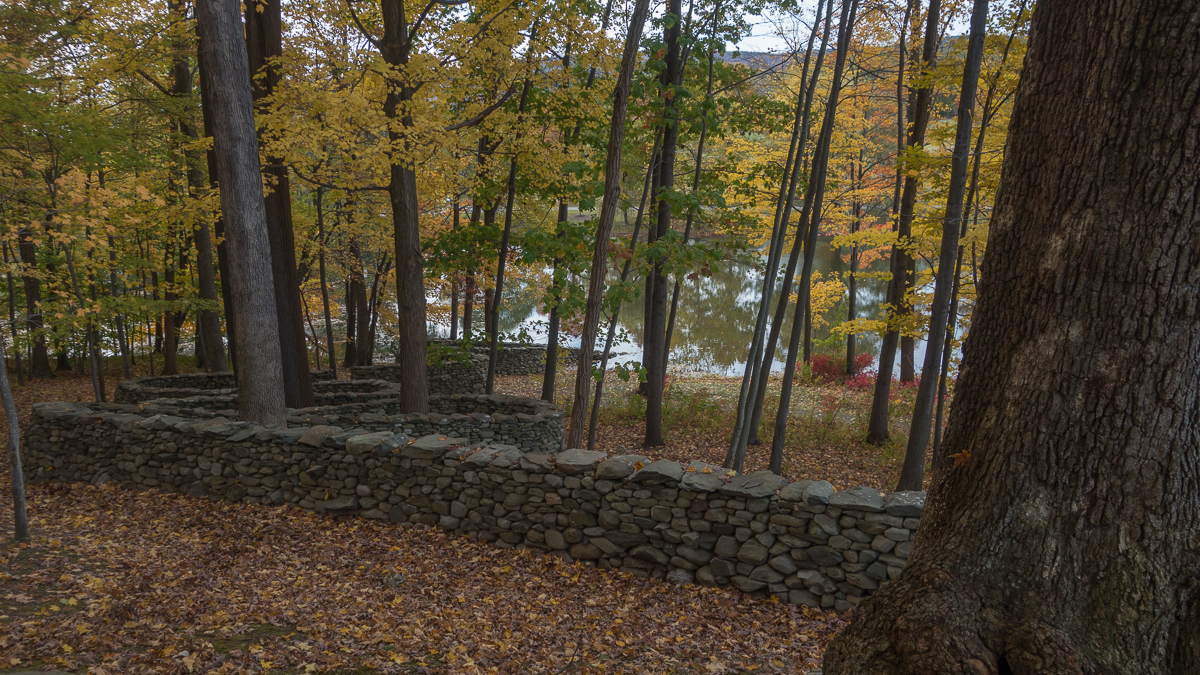 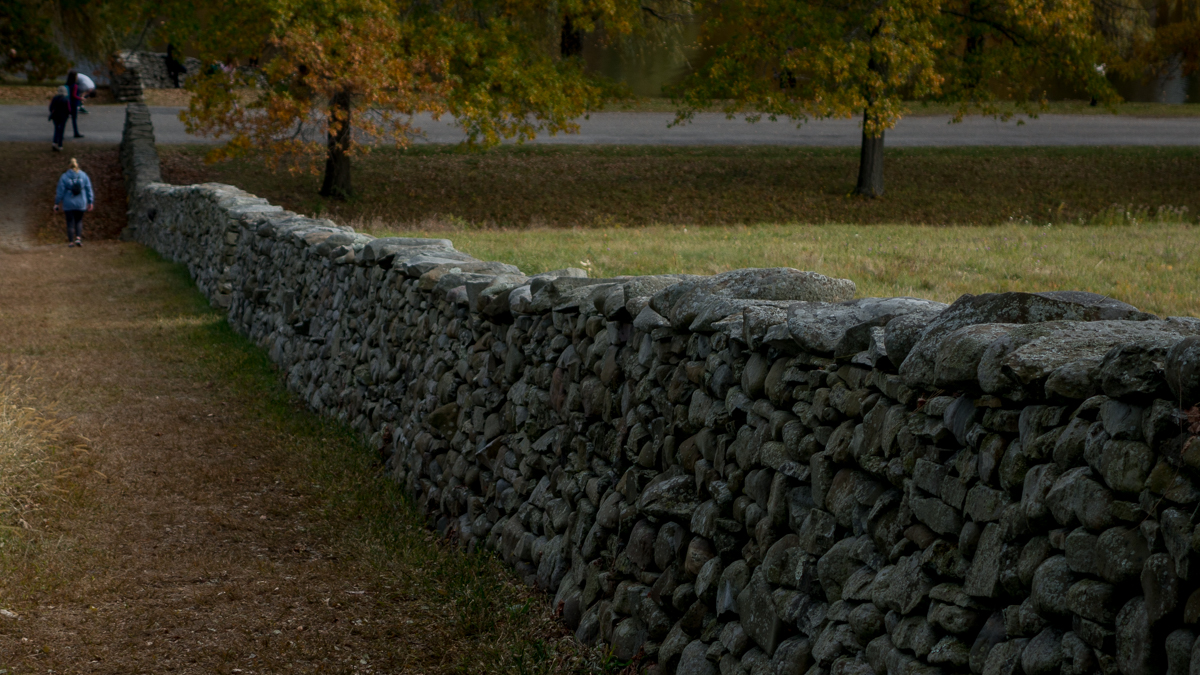 On the other side of the pond, the wall climbs a hillside.

Storm King has about 150 pieces of art spread throughout its 500 acres. This means that these sculptures – often big and sometimes huge – can be seen as they should be seen: in the open, with plenty of space around them. 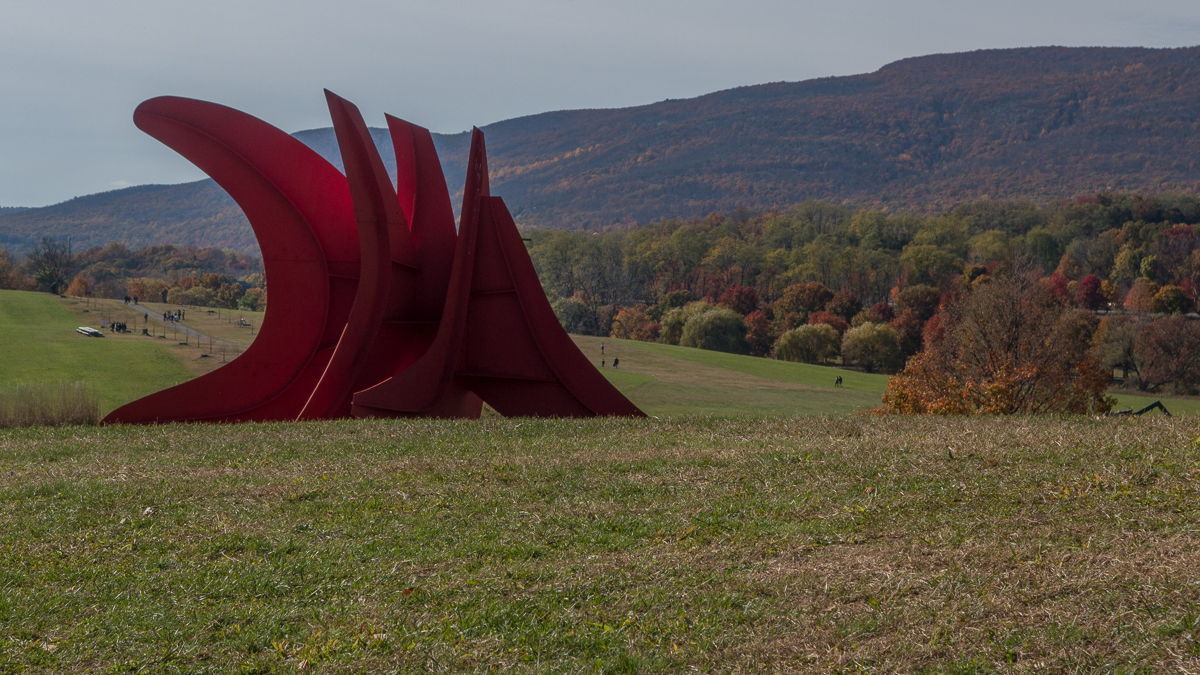 By Alexander Calder. I really liked this one, but then, I’ve always liked Calder. You can see the space for these sculptures in the Art Center. 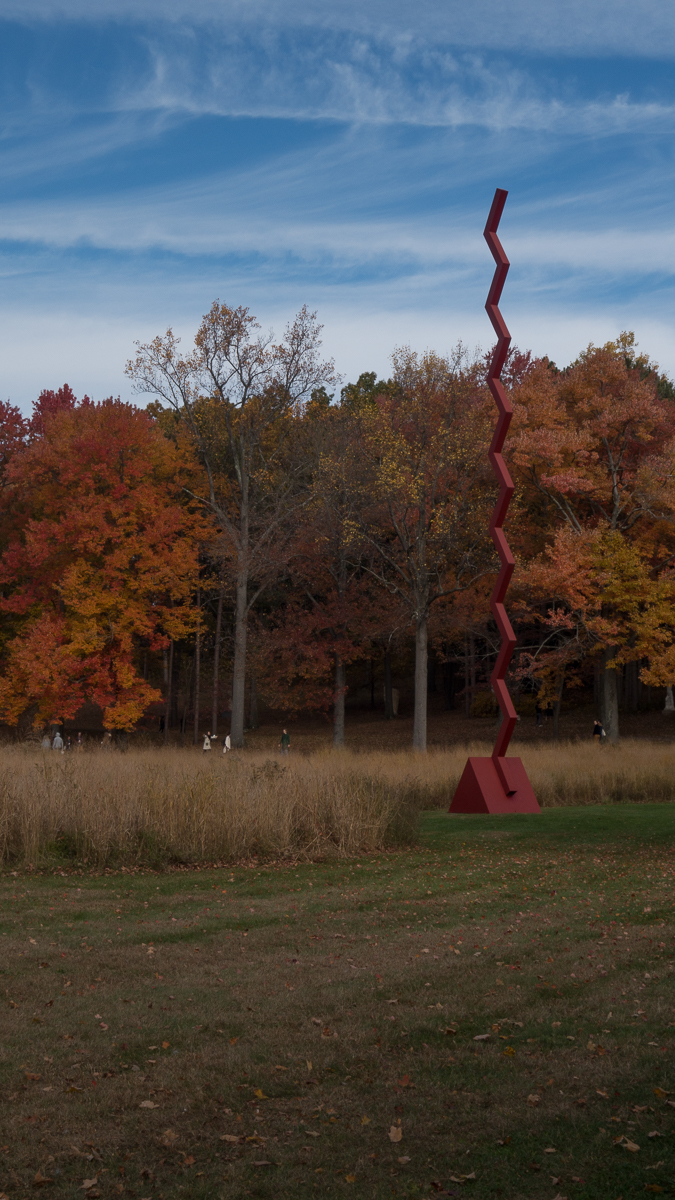 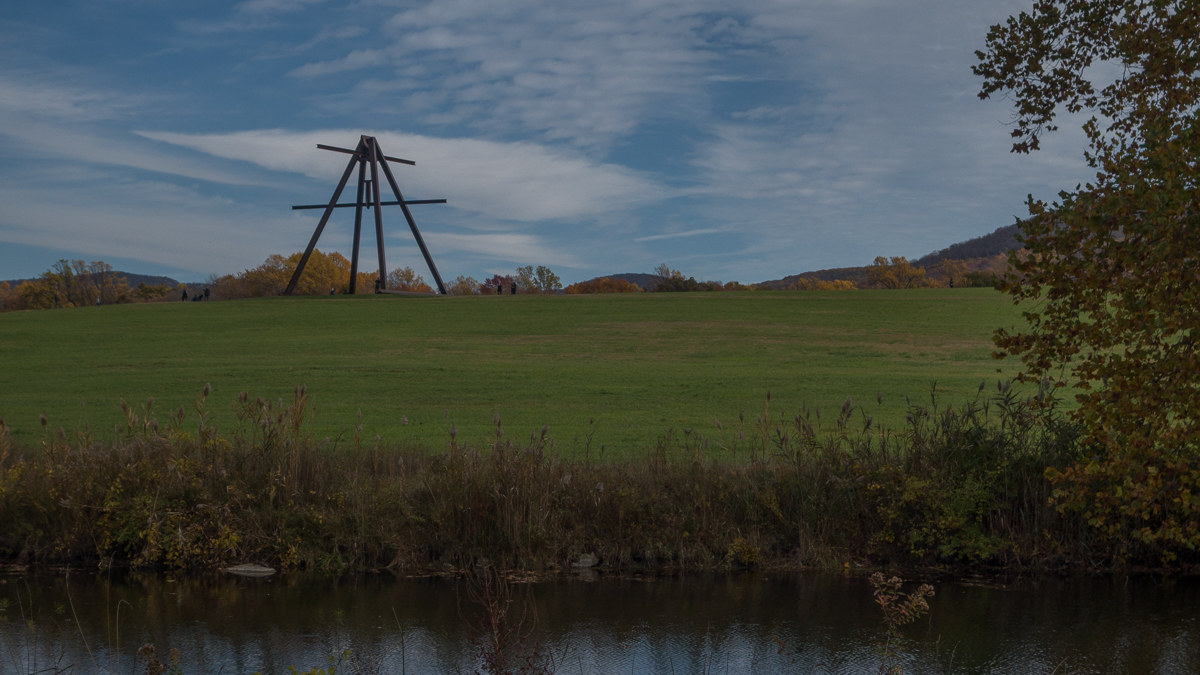 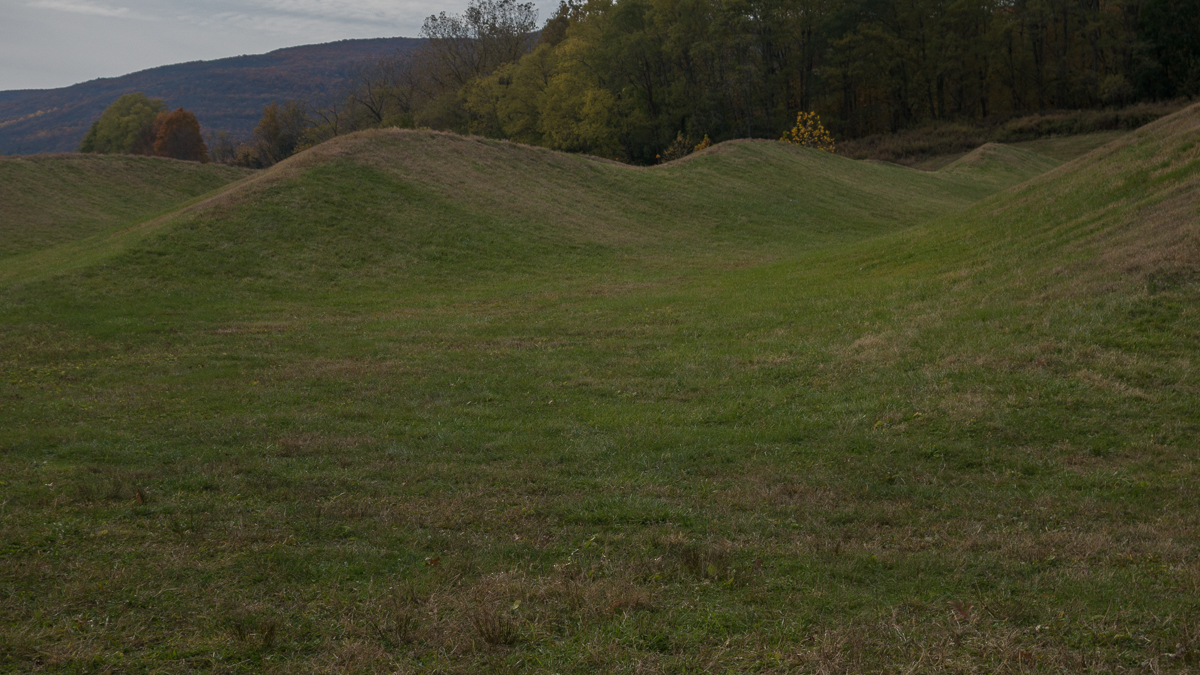 This is titled “Storm King Wavefield” and honestly, it look just like ocean waves. We liked this one a lot, too. 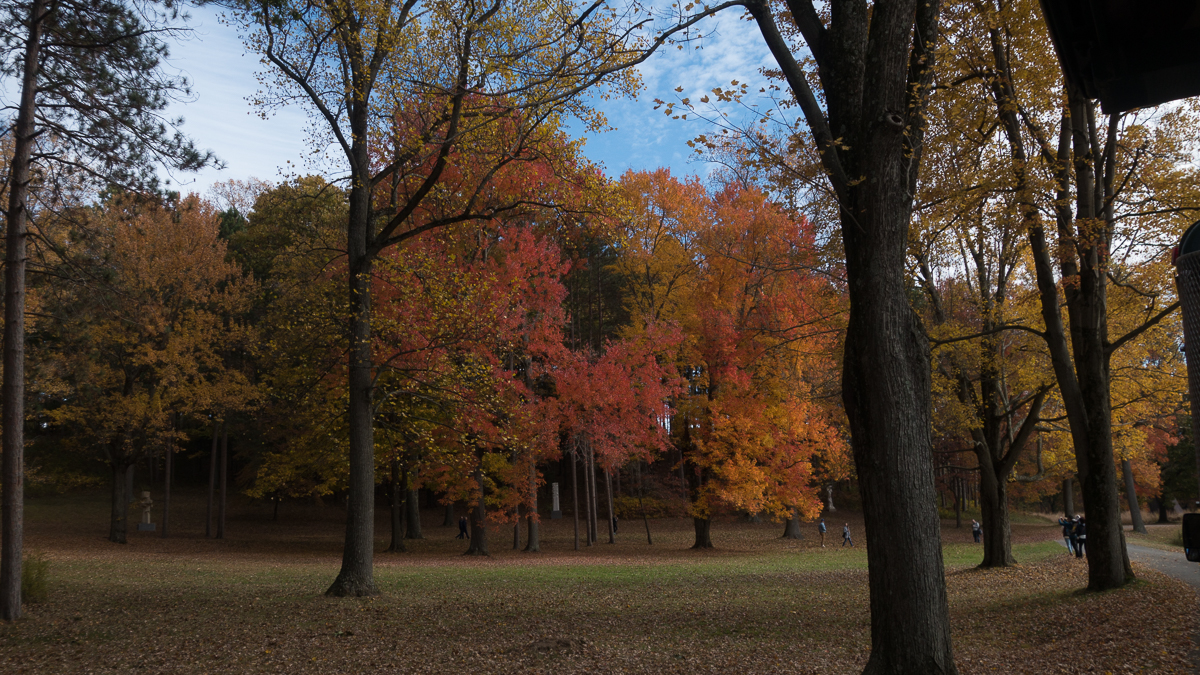 No sculpture here, just Mother Nature saying, “You think those sculptures are so great? Look at this!”

We loved Storm King, and thank Craig and Clara and Henry for taking us there. We’ll be back, that’s for certain.

At the other end of the art spectrum is the Great Jack o’Lantern Blaze: more carved pumpkins than you thought could be gathered in one place. Held on the historic Van Cortland estate about 30 minutes north of Elmsford, it comprises over 10,000 (!) carved pumpkins. Now, maybe 2/3rds of them are not really pumpkins, but something that looks just like a carved pumpkin and assembled into: a forty-foot tall Statue of Liberty, dinosaurs, a unicorn, Washington Irving’s Headless Horseman bridge, a sea serpent and many other installations. All the walkways and many of the installations had real carved pumpkins. Since this event goes for six weeks, those carved pumpkins have to be replaced as they spoil and so the organization has 1,000 volunteers who carve pumpkins – usually in amazing shapes. 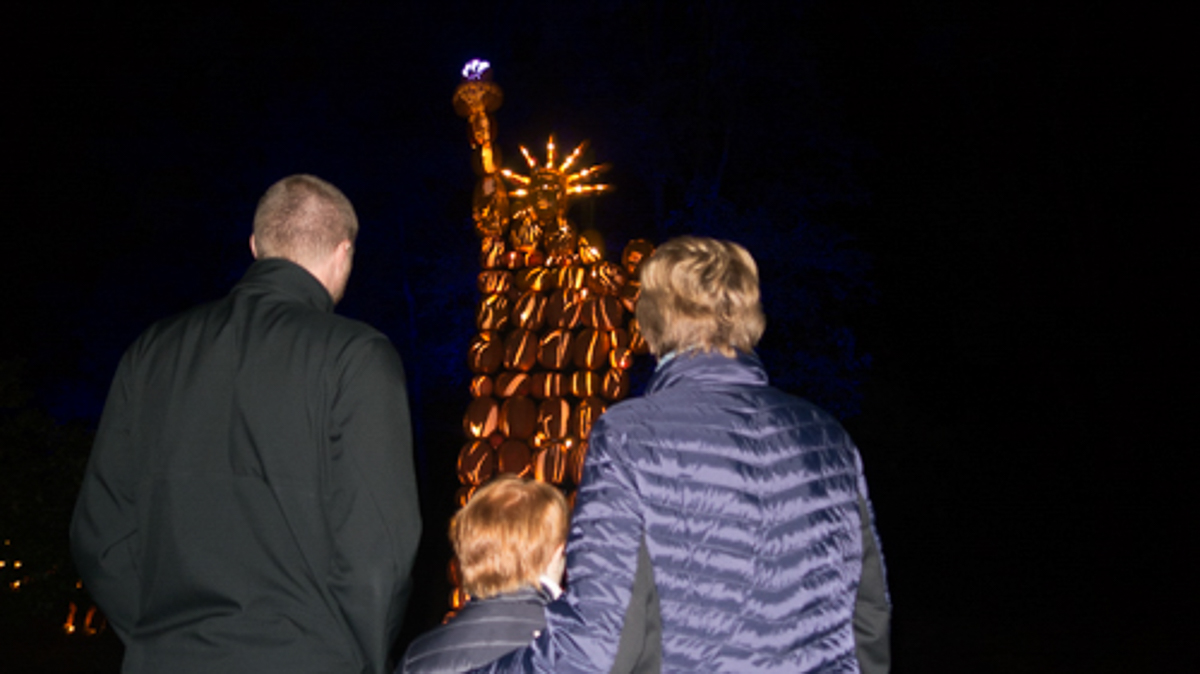 Laurie, Craig and Clara checking out the Statue of Liberty, made of carved pumpkins. 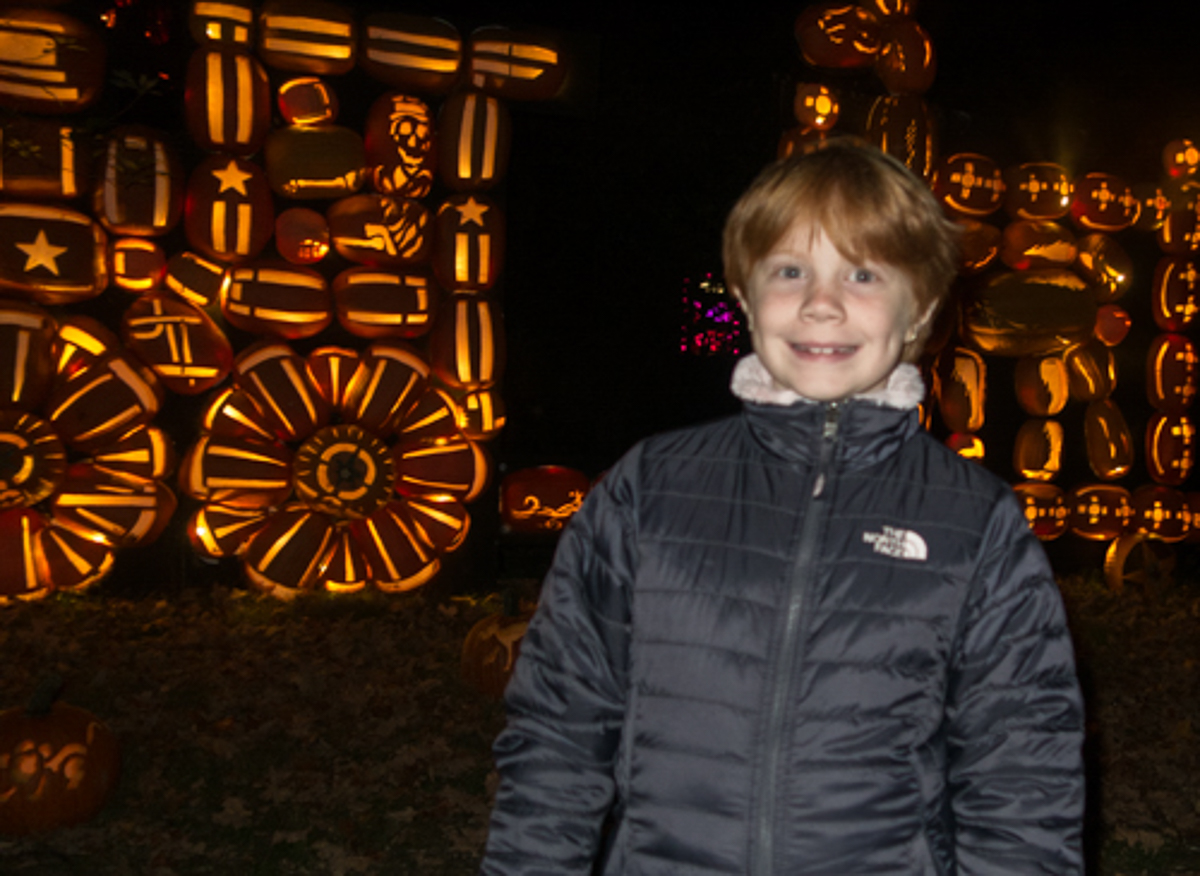 Clara standing in front of a carved-pumpkin train. 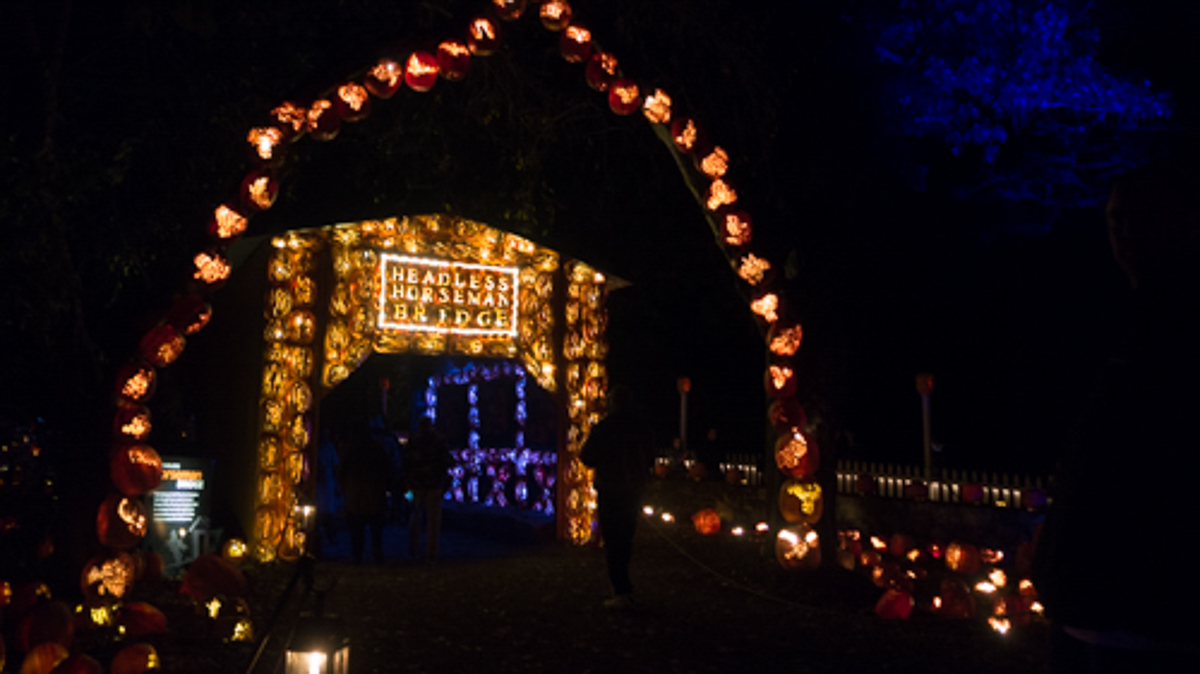 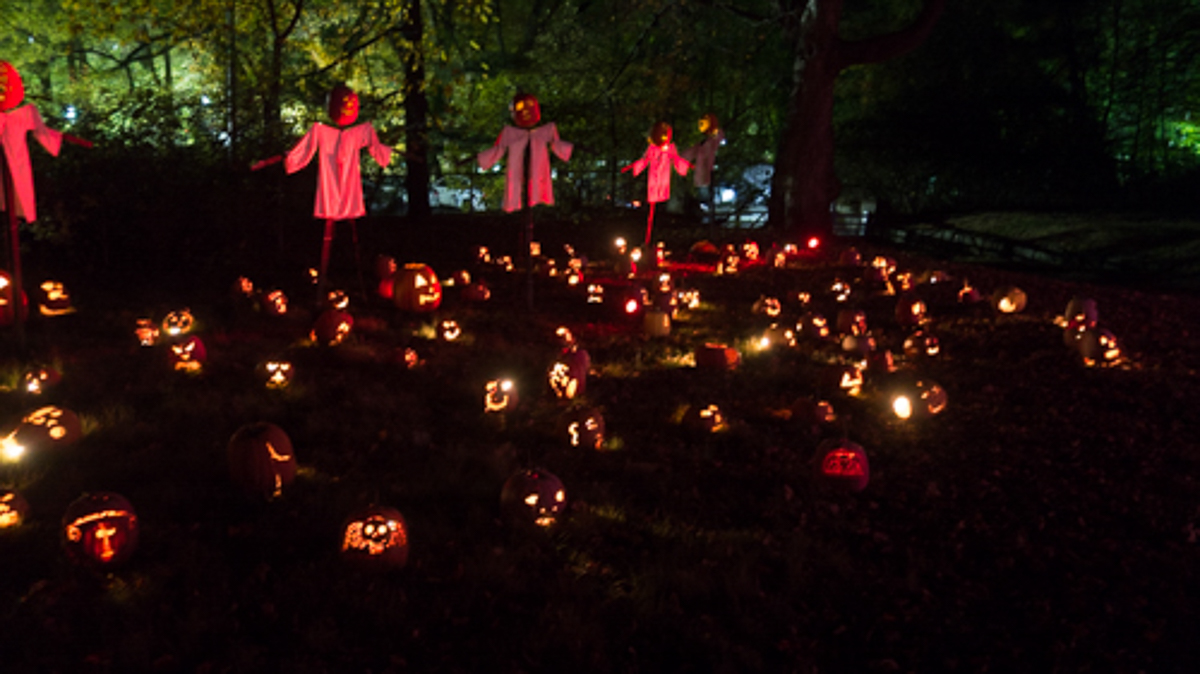 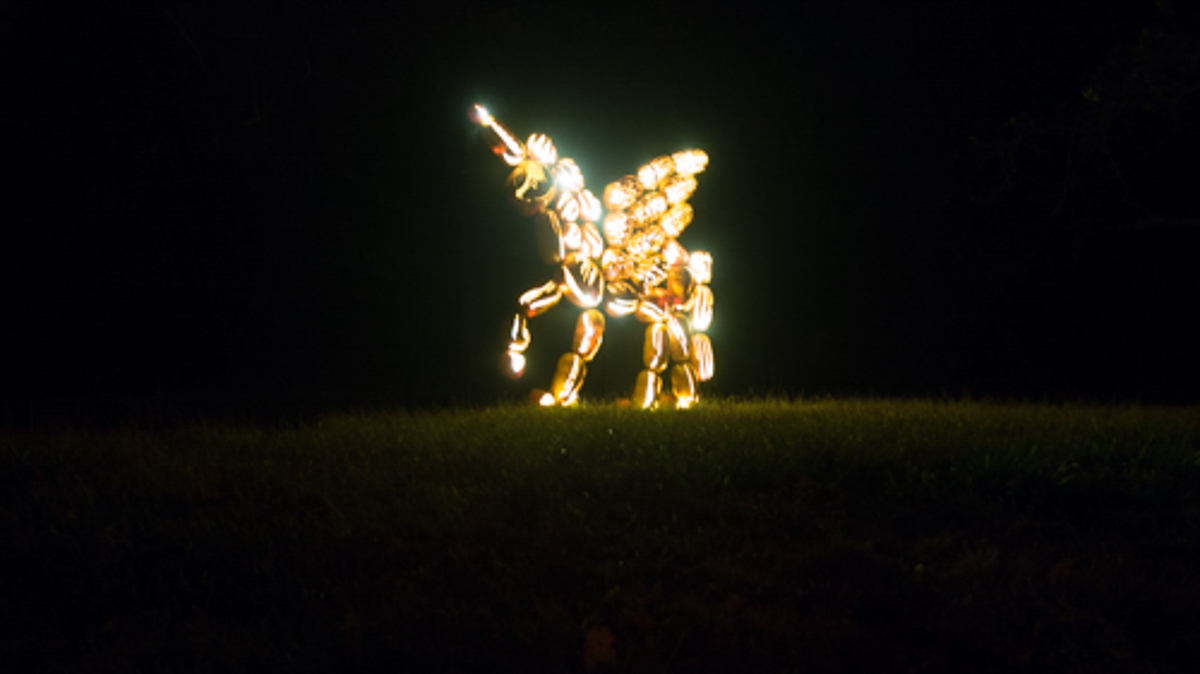 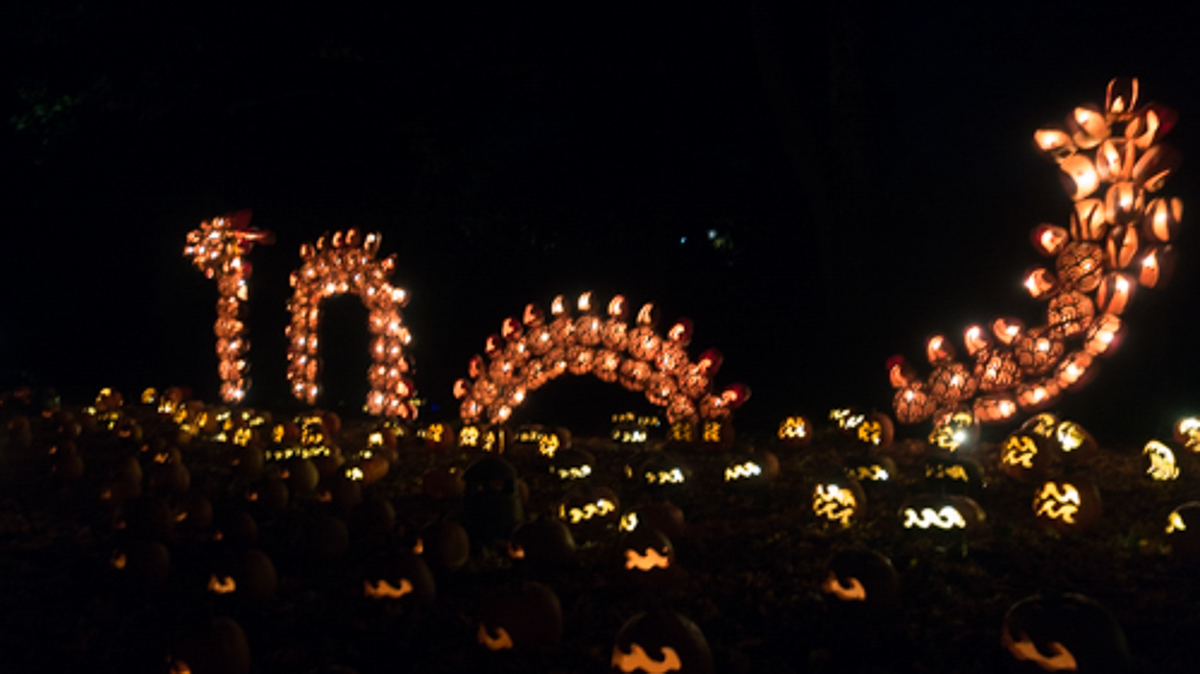 Lest you think this is a small gathering of folks, I’d guess there were 5,000 people there on a cold Thursday night.  You can’t see it in the pictures, but there were crowds everywhere. Some in-the-head calculating makes me think they brought in about $100,000 that night alone, and the Blaze runs for almost six weeks. Makes me want to start carving pumpkins for a Renton Blaze next year…

In 1921 John D. Rockefeller, Jr. commissioned the building of the Union Church of Pocantico Hills. By itself, it is a beautiful church. 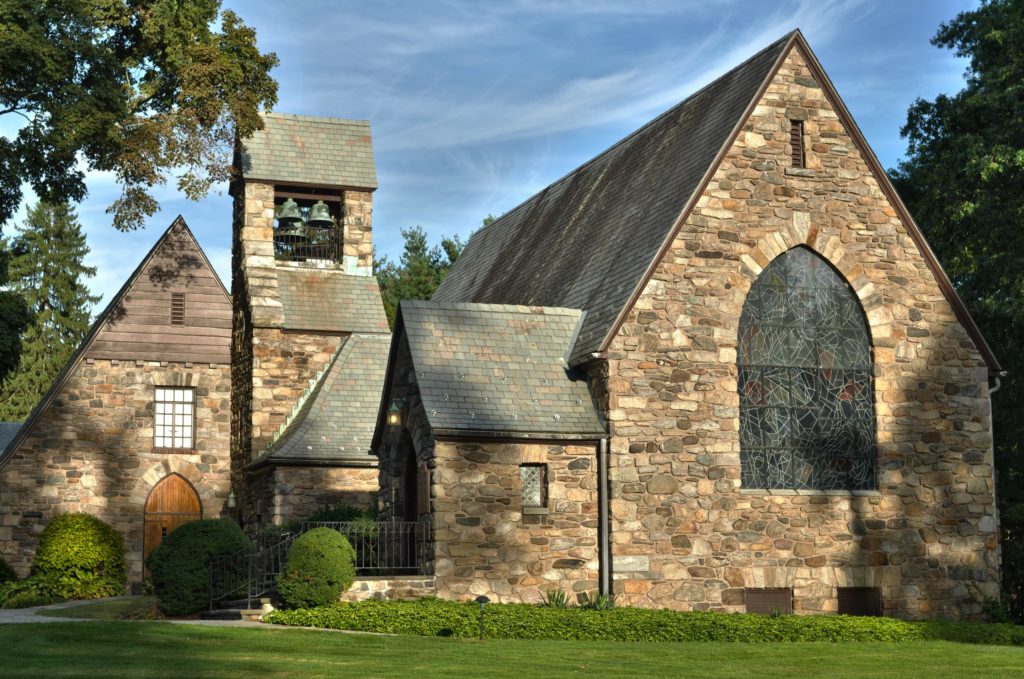 In 1948, John D. Rockefeller, Jr.’s wife, Abby Aldridge, died, and her son Nelson Rockefeller (an avid collector and enthusiast of modern art) tried to get Henri Matisse to do a rose window in the church in her memory. Matisse was not enthusiastic about the idea and was in poor health, but as Abby had supported him for years, he acceded and started designing the window. He completed the design two days before he died. His daughter carried out the design in stained glass and supervised the installation. The rose window is not big – maybe 8 ft across – but it is just lovely. 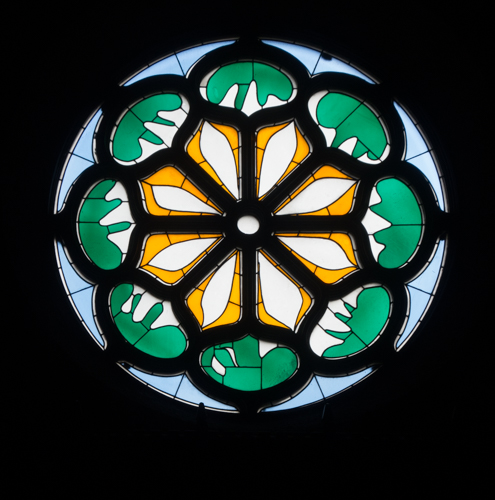 After the death of his father, John D. Rockefeller, Jr., in 1960, Nelson asked Marc Chagall to create a window in his memory. Chagall was delighted to do so, partly because he revered Henri Matisse and was honored to have a window in the same location as a Matisse work, but also because the Rockefellers had supported him too. He created this window, on the Good Samaritan theme, because he looked upon John D. Rockefeller, Jr. as a good samaritan for all his philanthropic work. 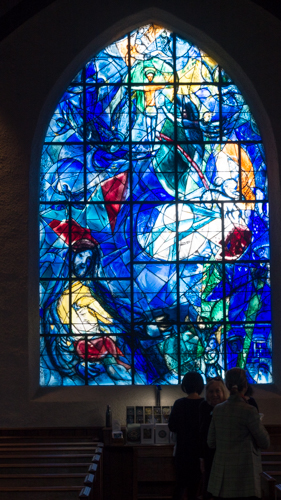 This Marc Chagall window is about 20 ft high and shows the vibrant blue color that Chagall loved.

In 1961 Michael, a son of Nelson Rockefeller, disappeared while on an anthropological expedition in New Guinea. Nelson asked Marc Chagall to create a stain-glass window in his memory, which Chagall did. Then over the years Chagall did seven more side windows memorializing other members of the Rockefeller family. In this small and simple church (it holds about 120 people), these windows steal the scene. Unfortunately, before I could take pictures of these side windows, the guide pointed out that photography is not allowed, so I had to make due with my two “stolen” pictures. I guess if you want to see the other eight Marc Chagall windows here, you’ll just have to make a trip to Pocantico Hills. Trust me, it’s worth it.

I mentioned above that Pocantico Hills is the location of the Rockefeller family estate; Kykuit (pronounced “cake-oot”) is the name of the actual estate. Once over 4,000 acres, it is now around 350, the rest having been given to cities and the county for use by residents as parks and forests open to the public for hiking, walking and biking (one day we took a walk with Craig through a section of the estate that has been donated).

The Historic Hudson Valley organization offers tours through Kykuit, ranging from an hour to three hours long. We decided that would be pretty interesting and signed up for the three-hour tour.

The main house was started in 1902 by John D. Rockefeller, Sr. After six years (and a fire), it was occupied, but John D. did not like its layout and had it rebuilt, finally being completed in 1913. It has forty rooms and twenty bathrooms, many formal and informal gathering areas, although looking at the “informal” areas, I suspect a suit and tie was required for men to enter them; informal, indeed. The building is, um, rather nice. About the mansion it’s said, “It’s what God would have built, if only He had the money.” 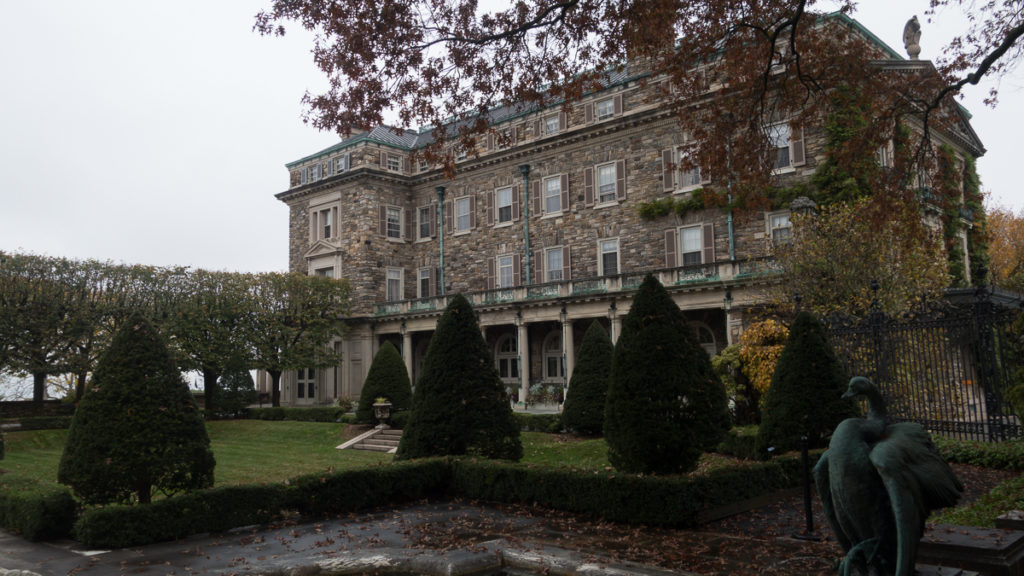 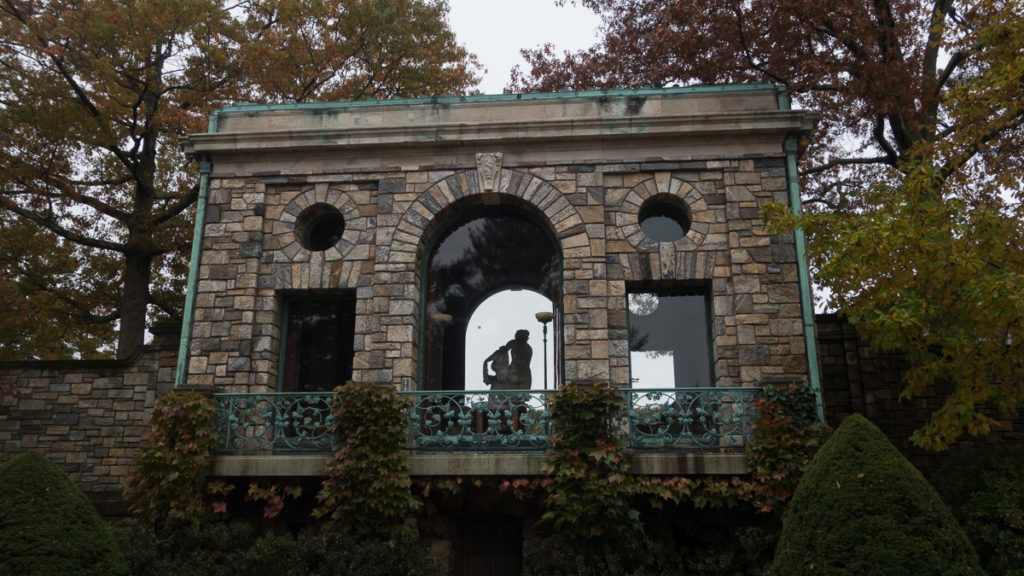 The Tea House. It had a full ice cream soda-bar for the kids. 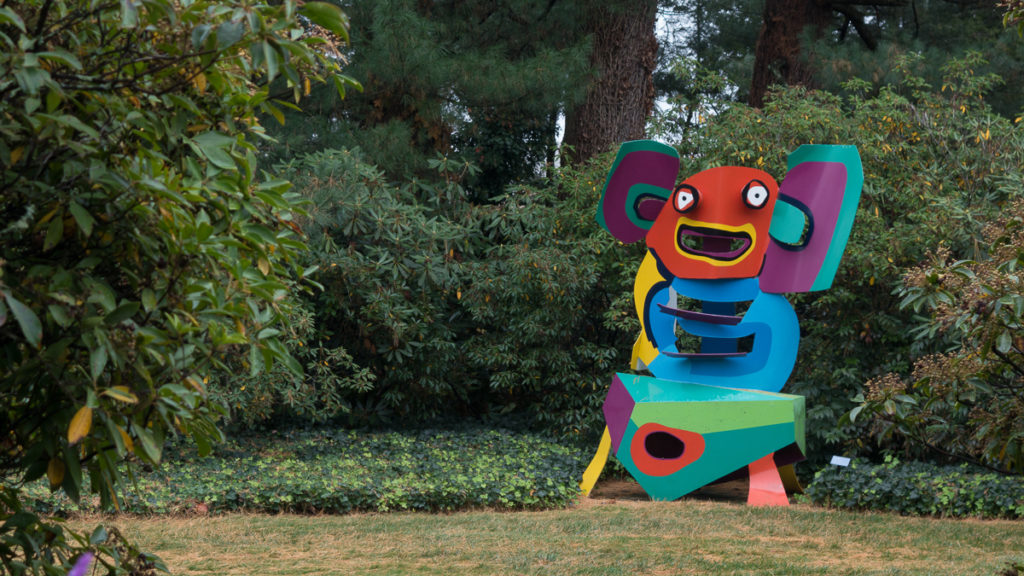 Our guide told us that one day Nelson Rockefeller found some Rockefeller kids shooting at this art work with pellet guns. He was not amused. 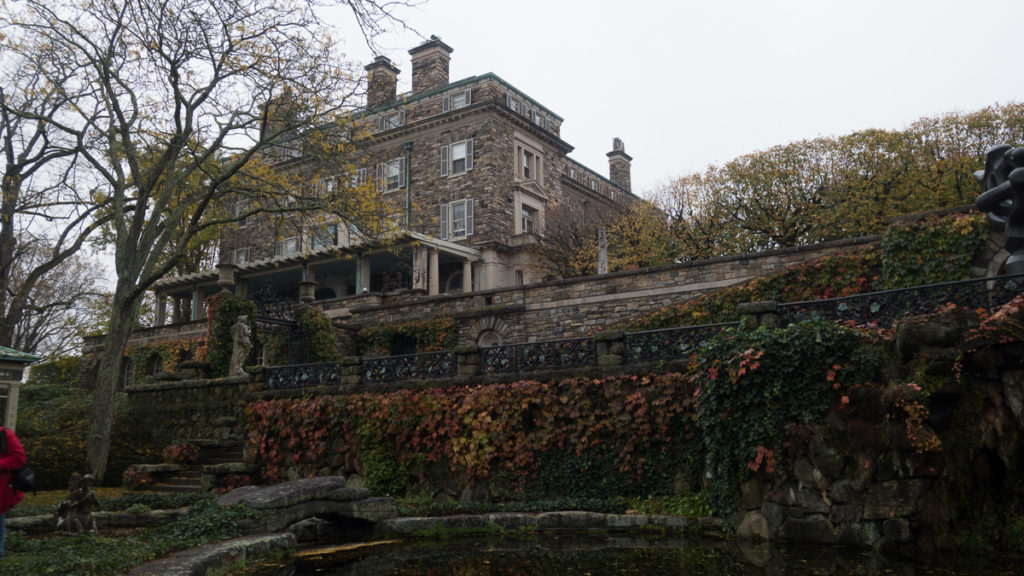 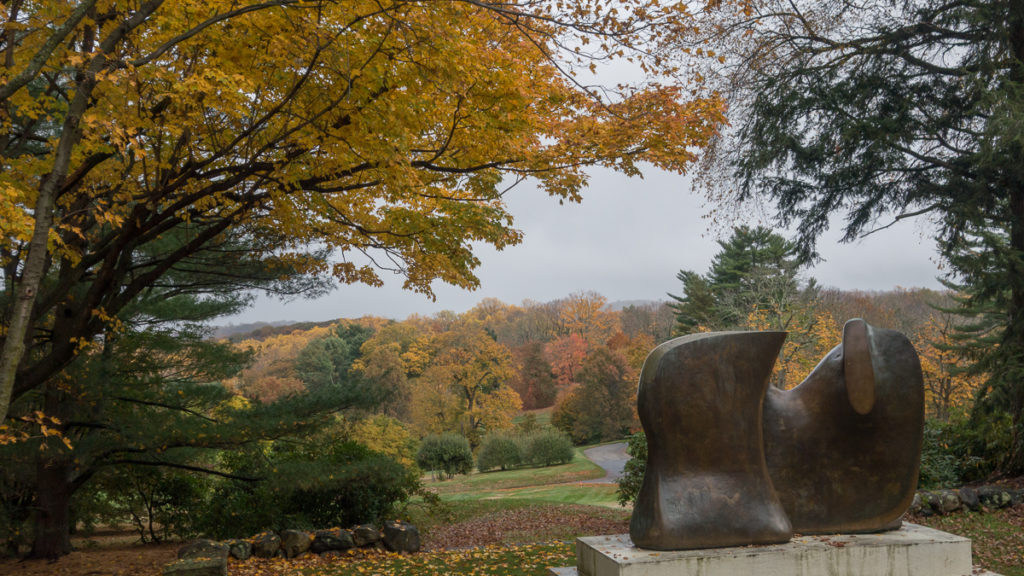 A Henry Moore sculpture because, you know, why not?

View over the estate, toward the Hudson River. The gardens at Kykuit confirmed what we discovered at Storm King Art Center: outdoor sculpture needs lots of space. 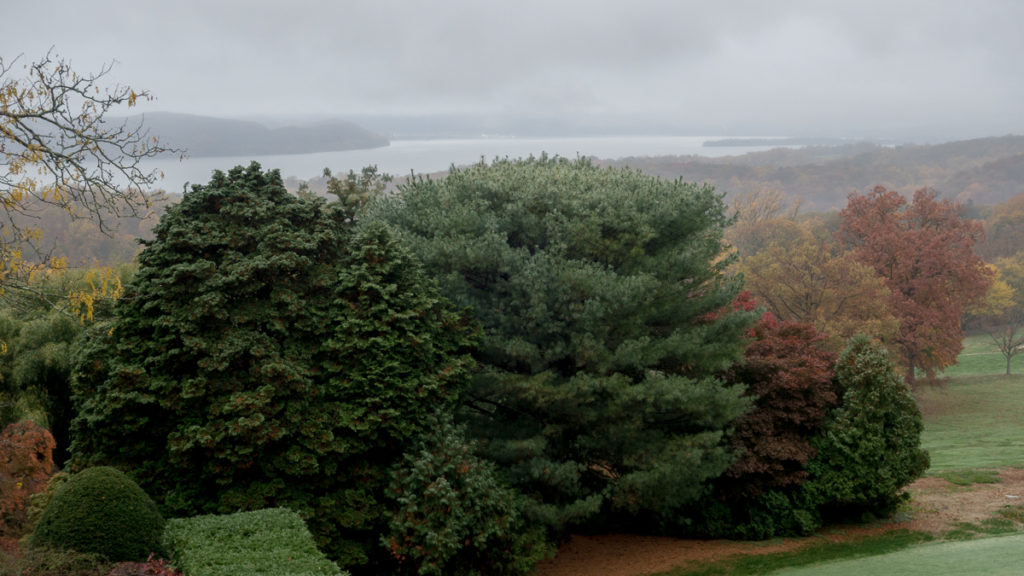 The Hudson River in the distance. Not too bad a view.

The tour ended in the carriage house, which had a collection of the horse-drawn carriages used by the Rockefellers, and a number of their cars, including Nelson’s Chrysler used when he was governor. I particularly liked this one: 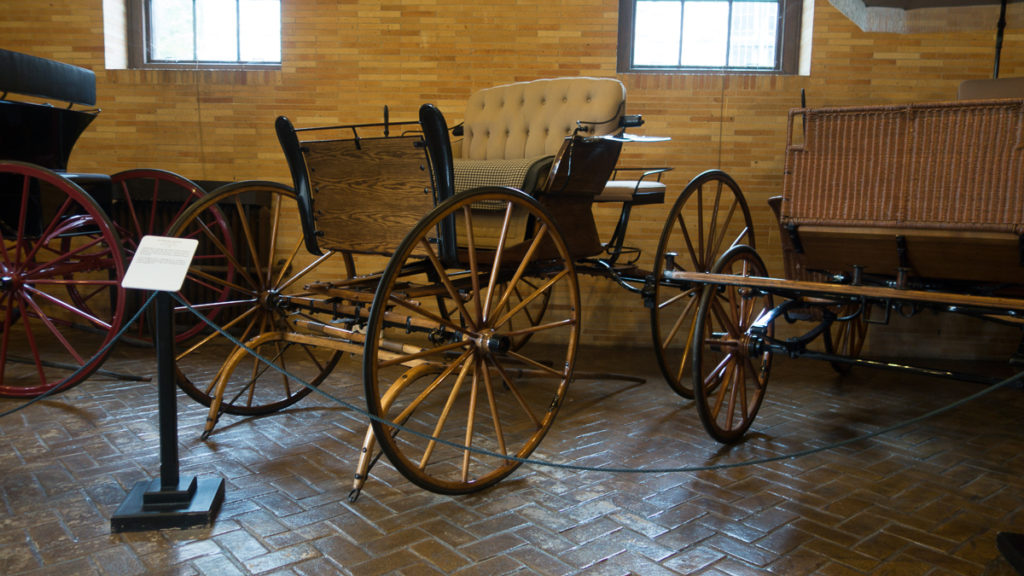 I might point out that the tour did not include a visit to the “Playhouse.” The Playhouse has a full gymnasium, indoor swimming pool, game rooms and goodness knows what else and is approximately 48,000 square feet. “Playhouse” indeed.

Rockefellers – now the fourth generation – still live in houses on the remaining land. David Rockefeller, the last of the third generation, died in 2017 and his land and house recently sold. For $32 million. We were too late to enter a bid, unfortunately. Then objects from his estate were sold, mostly art. That auction raised—wait for it —$835 million, all of which went to charitable organizations David had supported while he was alive. Notable items: a Picasso at $115 million, a Monet at $85 million and a Matisse at $81 million.

Kykuit was pretty amazing; well worth the time and price of the tour. We’d like to go on a sunny day, but even in the mist and clouds, it impresses.

Great trip. We’re learning more and more about the Hudson River Valley and its many attractions. The area is beautiful, that’s for sure.

As always Craig and Annie were the best of hosts. We love visiting them in Elmsford and are already looking forward to our next trip there.

This entry was posted in Ambles, New York. Bookmark the permalink.