The last stop on our “Greatest Hits of Spain” tour is also the place I’ve known longest in Spain, not counting Madrid: Segovia. It is also a place with which I have some emotional ties.

In the late 1970s/early 1980s I came to Madrid half a dozen times in my work at Boeing. The people I worked with at Iberia Airlines knew I brought an expense account with me, and they loved to go to Segovia for lunch. So the Boeing salesman, Pat Finnigan, three Iberia folks and I would pile into Pat’s tiny SEAT 124 and drive 90 minutes to Segovia for lunch at a famous restaurant there, Duque. Pat Finnigan was by no small measure the best person I ever worked for or with, and we became good friends. He died four years ago, and I can tell you that I felt his presence the whole time we were in Segovia, especially when Laurie and I had lunch at Duque.

The other connection I have with Segovia is Queen Isabel – she of Isabel and Ferdinand, Christopher Columbus and all that. After I went to Madrid I started to read about Spain and quickly became interested in Isabel, reading everything I could about her. She conducted her monarchy in an almost revolutionary way. The Segovia connection comes because she lived here for quite a while, and was here when her father died. To cement her claim to the throne, she got the local church and government officals to crown her in a church in Segovia’s Plaza Mayor. It’s possible to walk the same streets she walked, and stand in that Plaza Mayor. History; gotta love it.

Segovia is known for three monuments: the amazing Roman aqueduct, the castle (actually, the Alcázar), and the Cathedral.

Pretty impressive. The aqueduct was built around 100 AD, when Spain was part of the Roman Empire. It stands 98 ft high at its highest point, and consists of 167 arches. Built of granite blocks, it uses no mortar to hold it together. It has been reconstructed a couple times, but is essentially as it was when finished. 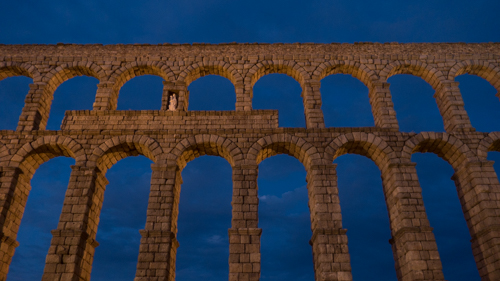 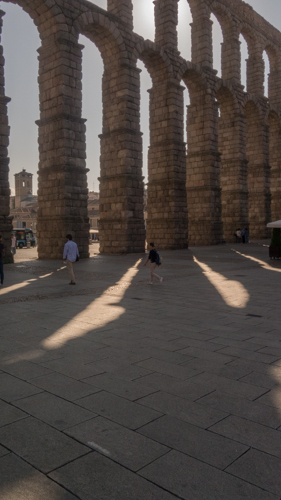 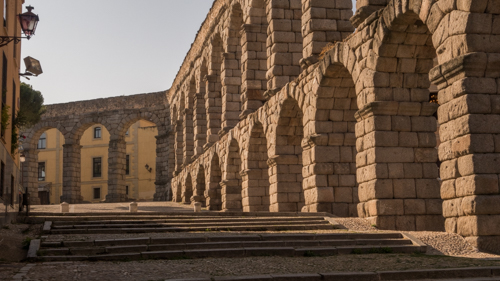 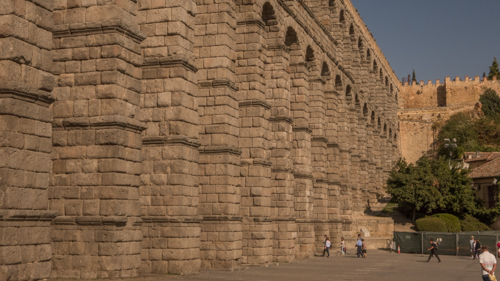 I first saw the aqueduct in 1980, give or take a year. It still carried water into the old part of Segovia then. That stopped about ten years later, but think about that: this thing carried water into Segovia for somewhere around 1800 years. Amazing.

This building has historic significance: in 1474, the king of Castille and León (then the biggest and most powerful part of Spain) died, and his daughter Isabel claimed the throne. She was living in the Alcázar at the time and she knew that her half-brother would also claim the throne, so it was important that she be crowned first. She gathered the local aristocrats and government officials, left the Alcázar and they all walked to Iglesia St. Miguel, in the Plaza Mayor, where she was crowned Queen of Castille and León – effectively, Queen of Spain. (Her half-brother did, indeed, also claim the throne; it took a couple battles between the armies of Isabel and Juan for her to fully claim her title.) 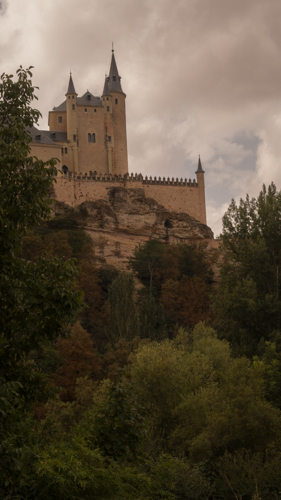 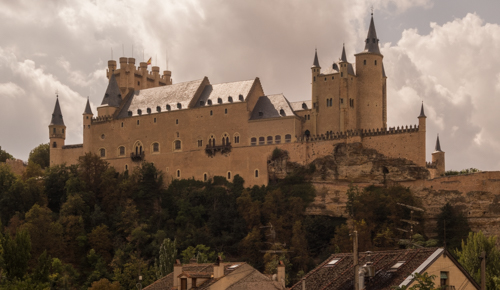 Inside the Alcázar is a museum and rooms furnished in period furniture. It’s interesting, but as we had visited it on a previous visit, we skipped it this trip.

The Segovia Cathedral is the last major church in Europe built in Gothic style. It’s huge, but honestly, not all that interesting. 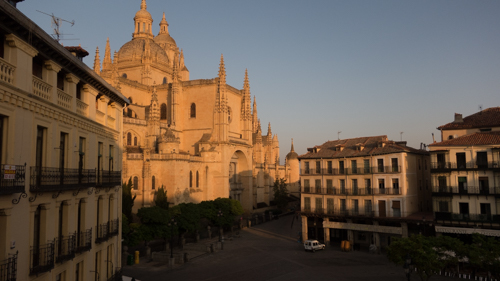 The Segovia Cathedral, from our hotel room window. 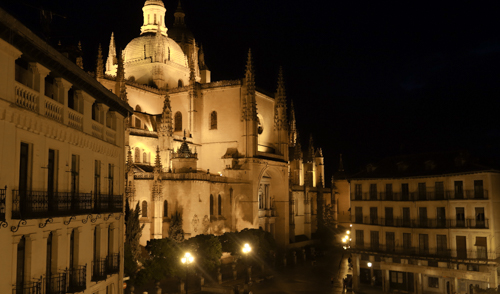 Other Segovia sights – the paseo

My friend Pat Finnigan said he believed  that Segovia keeps the tradition of the paseo, the evening walk, better than any other Spanish town. Starting about 7 p.m. folks start the walk, between the Plaza Mayor and the Aquaduct. It starts to peter out about 10 p.m. 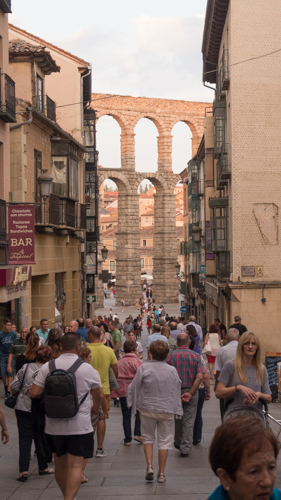 Segovia’s famous Roman aqueduct, with the paseo in full swing. 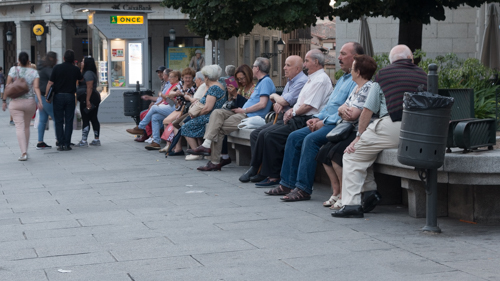 It’s not all walking – sometimes you just have to sit and rest and watch the world go by. 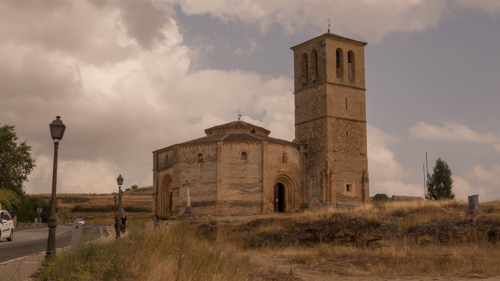 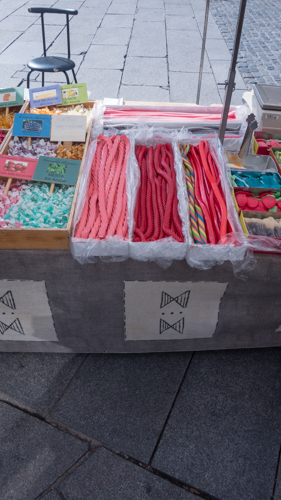 At the weekly market in the Plaza Mayor: that’s what I call a licorice stick. It was about three feet long and an inch thick. Oh, my aching molars. 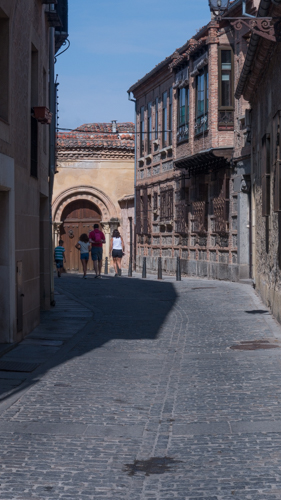 A typical street in the old city of Segovia. 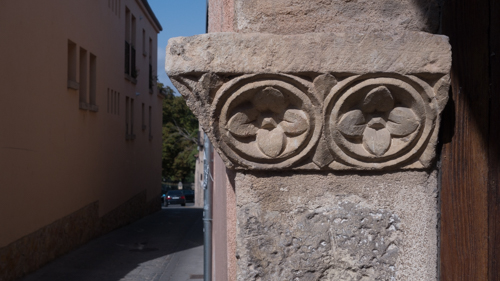 The capitol on a column in a residential house. 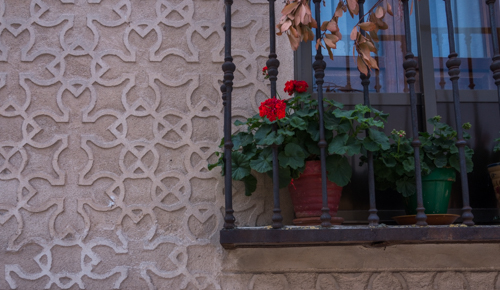 A wall with escrafiado on it. This wall decoration is everywhere in Segovia and we loved finding buildings decorated this way. I’ll do a separate post on this beautiful art.

The Route into Segovia

Laurie believes that I try to take the narrowest route possible into any town we visit. That is, of course, completely wrong. In Segovia, it wasn’t my fault. I knew exactly how to get to our hotel on the Plaza Mayor, having done it a few times. Besides, the GPS agreed with me on the route. So we arrived at the main entrance to the city and, whoops: 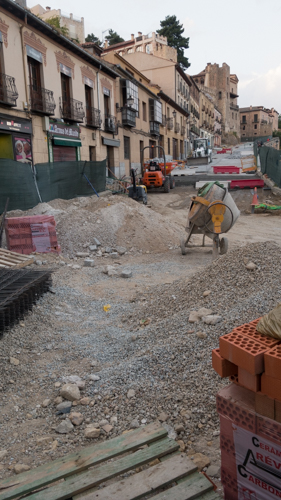 Ok, so we can’t drive to our hotel by the normal, easiest, GPS-mapped route. I know another way.

See? Nothing to it! I’ve done this enough to not get puckered up over driving down streets like this. I’ve come to understand that I’m not the first driver to go through these streets and if the others could do it, I can do it. Laurie politely disagrees.

I’ve rambled on enough about this wonderful city. We stayed three nights and headed back to France. I’ll do one more post about the escrafiado walls of Segovia, and maybe one Spain wrap-up post. Honestly, if you could visit only one small town in Spain, Segovia would be my recommendation. Of course, you should also visit Toledo, Trujillo, Úbeda, Zamora, Santiago de Compostela, Arcos de la Frontera and any other place that looks interesting.

This entry was posted in Ambles. Bookmark the permalink.